One of the most popular mushrooms consumed by people worldwide are shiitake mushrooms. These mushrooms are valued for their savoury taste and numerous health benefits.

There are compounds in the mushroom that have been known to help boost immunity, support cardiovascular health, and even fight cancer.

In this article, we’ll explain to you everything you should know about shiitake mushrooms.

What Are Shiitake Mushrooms? 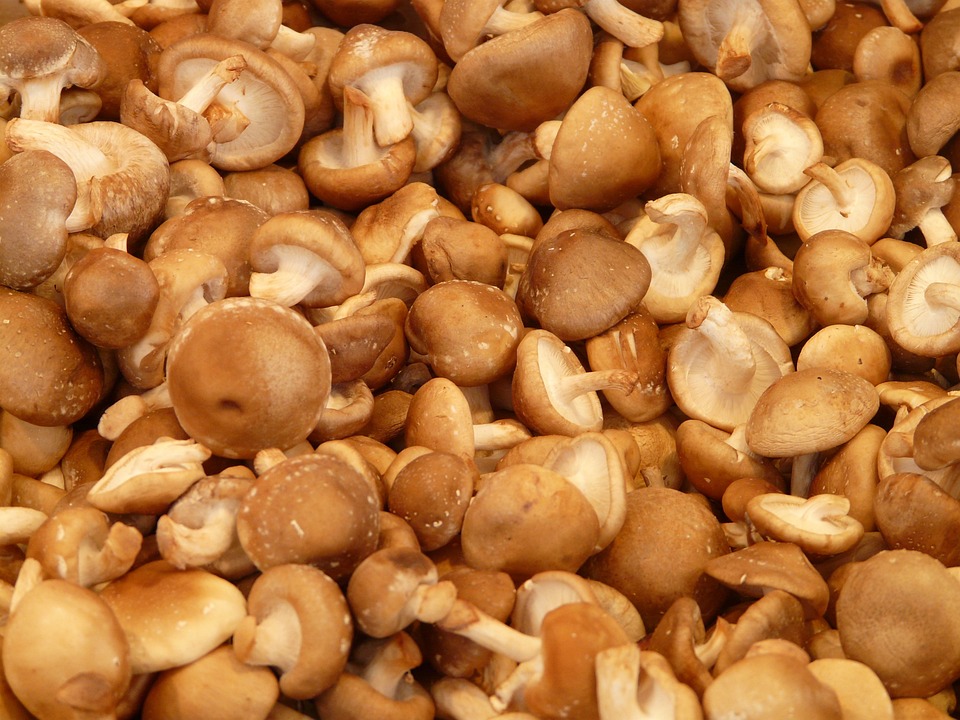 Shiitake mushrooms are forest mushrooms native to Asia that grow on wood logs. These mushrooms have been cultivated in Japan and China for many centuries as a food source.

The name shiitake comes from the word ‘shii’, which is one of the hardwood trees that the mushroom grows on, and ‘take’, which means mushroom. Shiitake mushrooms are one of the most cultivated mushrooms around the world, just behind the button and oyster mushrooms.

Based on tradition, shiitake mushrooms are cultivated on deadwood logs, which is a very time-consuming process to yield a good-quality mushroom. However, an alternative technique is to grow the mushrooms on waste products like sunflower seed hulls or corncobs.

Besides farmed shiitakes that can be bought in supermarkets, people can also forage these mushrooms in the wild.

Appearance and Taste of Shiitake Mushrooms

Shiitake mushrooms are quite easy to recognise due to their brown top, convex caps, tan-coloured stems, and off-white gills. Its caps can range from less than one inch up to 10 inches in diameters. Sometimes, these caps have white cracks on their surfaces – an indication of a more tasty mushroom. 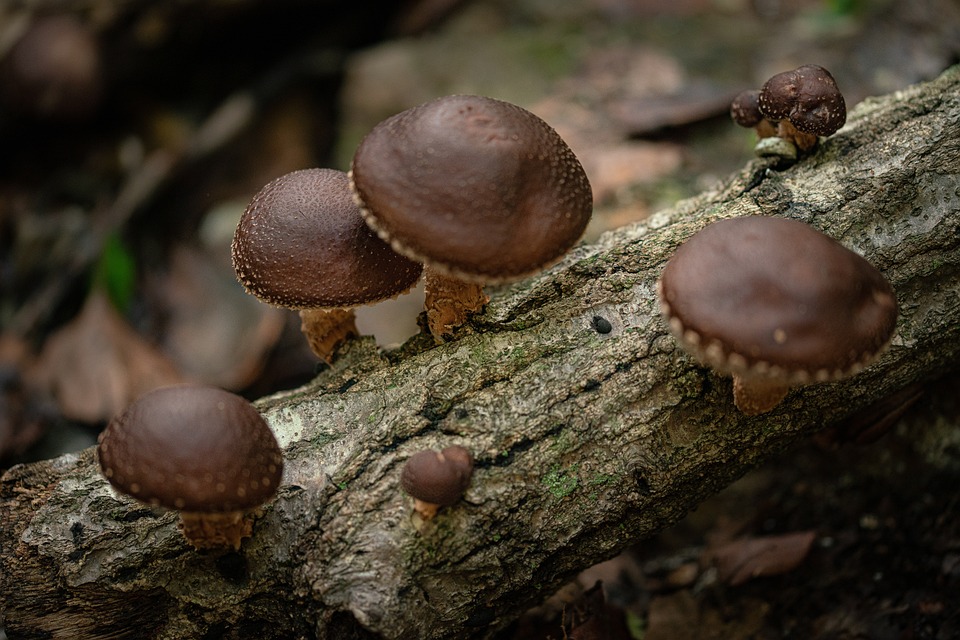 Shiitake mushrooms are known for their earthy, yet strong flavour. They are filled with umami due to the amino acid glutamate content present. Cooking shiitake caps result in a velvet-like, meaty texture while its stems can be a little chewy once sufficiently cooked.

How Are Shiitake Mushrooms Used?

There are two primary uses for shiitake mushrooms.

Compared to its fresh counterpart, dried shiitake have a higher umami flavour that tends to be more intense.

Umami flavour can be described as a meaty or savoury taste. It is often considered to be the fifth taste, besides salty, sweet, bitter, and sour.

Dried and fresh shiitake mushrooms can be added in stews, stir-fries, soups, and other meals. 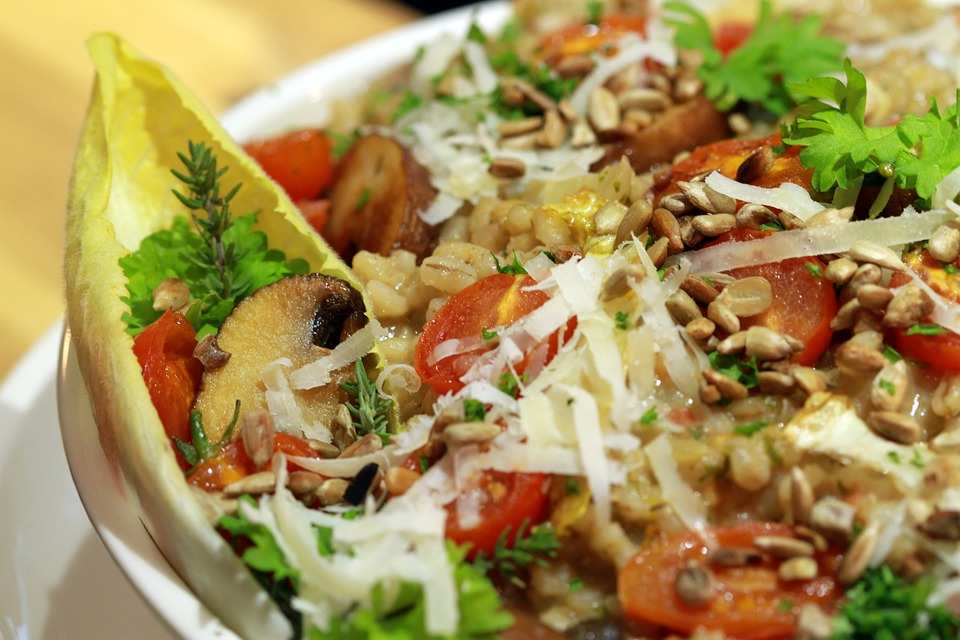 Shiitake mushrooms are also used as supplements worldwide, especially in traditional Chinese medicine. In fact, they have been part of medical traditions from places like Japan, Eastern Russia, and Korea. 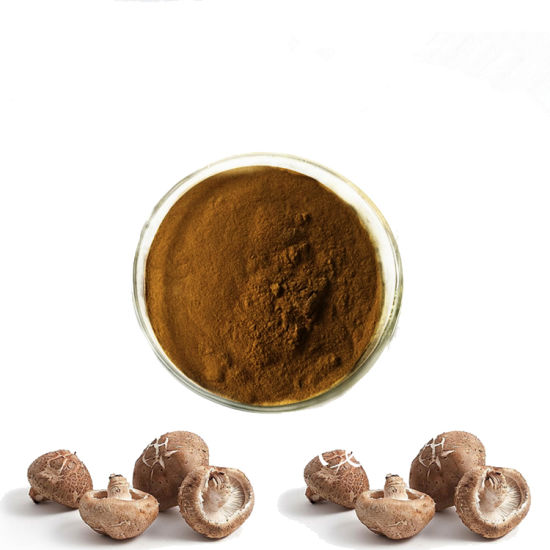 According to Chinese medicine, shiitake are believed to improve health and longevity, including the circulation in the body. Some studies suggest that the bioactive compounds present in shiitake could protect against inflammation and cancer.

However, these studies have usually been performed on animal studies instead of human subjects. Most animal studies utilise doses that far exceed those that would be normal for people.

Several studies have found that shiitake mushrooms contain phytochemicals that could protect the DNA from oxidative damage. Lentinan, one of the vital components of the mushroom, is said to protect the body from chromosome damage that results from anticancer treatment.

Another thing unique to shiitake mushrooms is that it contains all eight essential amino acids including other types of amino acids. It is no wonder the mushroom has been seen as a beneficial fungi in different types of traditional medicine.

Here are some other possible benefits one can get in adding shiitake mushrooms to their diet.

There have been reports that shiitake mushrooms could improve heart health. For instance, the mushroom contains three compounds that were found to help reduce cholesterol.

In rodents, researchers observed that feeding the animals shiitake powder lowered an increase in blood pressure in the subjects. Another study on rats that were fed a high-fat diet showed that subjects that were given the mushroom had less fat in their livers.

Shiitake mushrooms could also be consumed to improve immune health.

In one study, subjects who were given dried shiitake mushrooms daily for one month showed increased immunity and reduced inflammation levels. The immune benefit could be due to the polysaccharides present in the mushrooms. 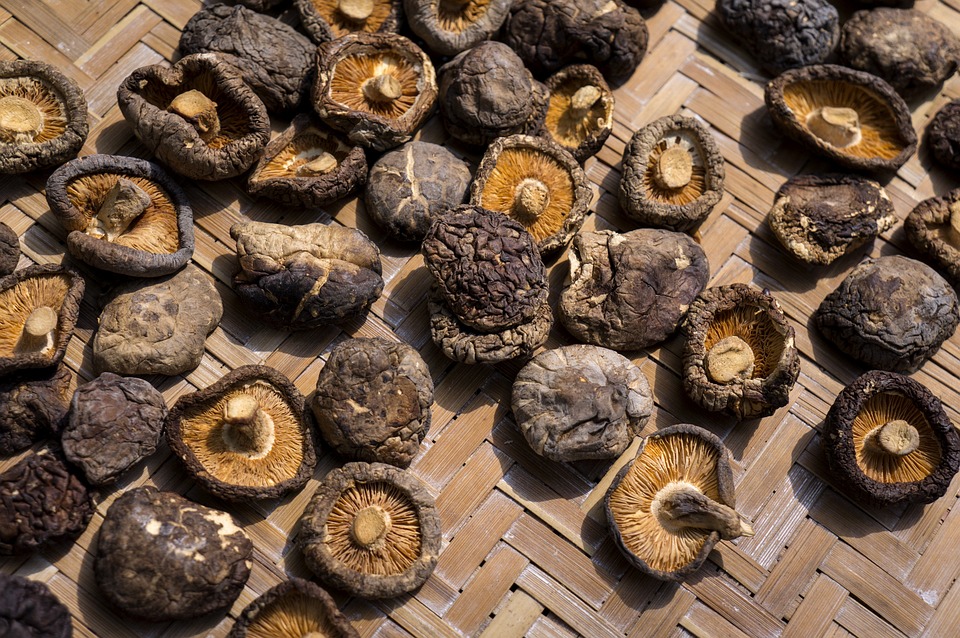 In one mouse study, researchers learned that shiitake supplementation helped minimise age-related decline in terms of immune function. This could be beneficial to people especially since the immune system weakens as we age.

Scientists also learned that the polysaccharides present in shiitake mushrooms could help fight cancer. For instance, the polysaccharide called lentinan helps in combating tumours by activating the immune system.

In another study, lentinan was found to reduce the growth and spread of cells related to leukemia.

Scientists found that many compounds in shiitake mushrooms offer antifungal, antibacterial, and antiviral effects. This could be particularly useful especially since resistance to antibiotics continues to spread nowadays.

Although these isolated compounds may provide antimicrobial capabilities, there is no solid proof that shows shiitake mushrooms to combat viral or bacterial infections.

Mushrooms are the only natural plant source that contains vitamin D. This vitamin is required by the body to develop strong bones, yet only a limited number of foods contain this essential nutrient. The levels of vitamin D in mushrooms vary based on how they are cultivated. Those that are exposed to UV light constantly have a higher amount of vitamin D.

In a study, mice that were given a low vitamin D and calcium diet developed osteoporosis. Meanwhile, the subjects that have UV-enhanced shiitake mushrooms were found to have better bone density.

How to Cook Shiitake Mushrooms

When cooking shiitake mushrooms, make sure to separate the caps from the stems. The stems are tougher and are going to take a while to soften up. Although caps and stems can be used together, the stems need to be cooked first and then add the caps later.

Based on the size of the caps, you would want to either slice or leave them whole. Using fresh shiitake mushrooms is possible, but they are going to take longer to cook.

The cooking process below are the two easiest methods of preparing shiitake mushrooms.

Prepare a medium skillet and then heat two tablespoons of olive oil or unsalted butter on medium heat. Start mincing a small garlic clove and sauté this until it becomes fragrant (around one minute). 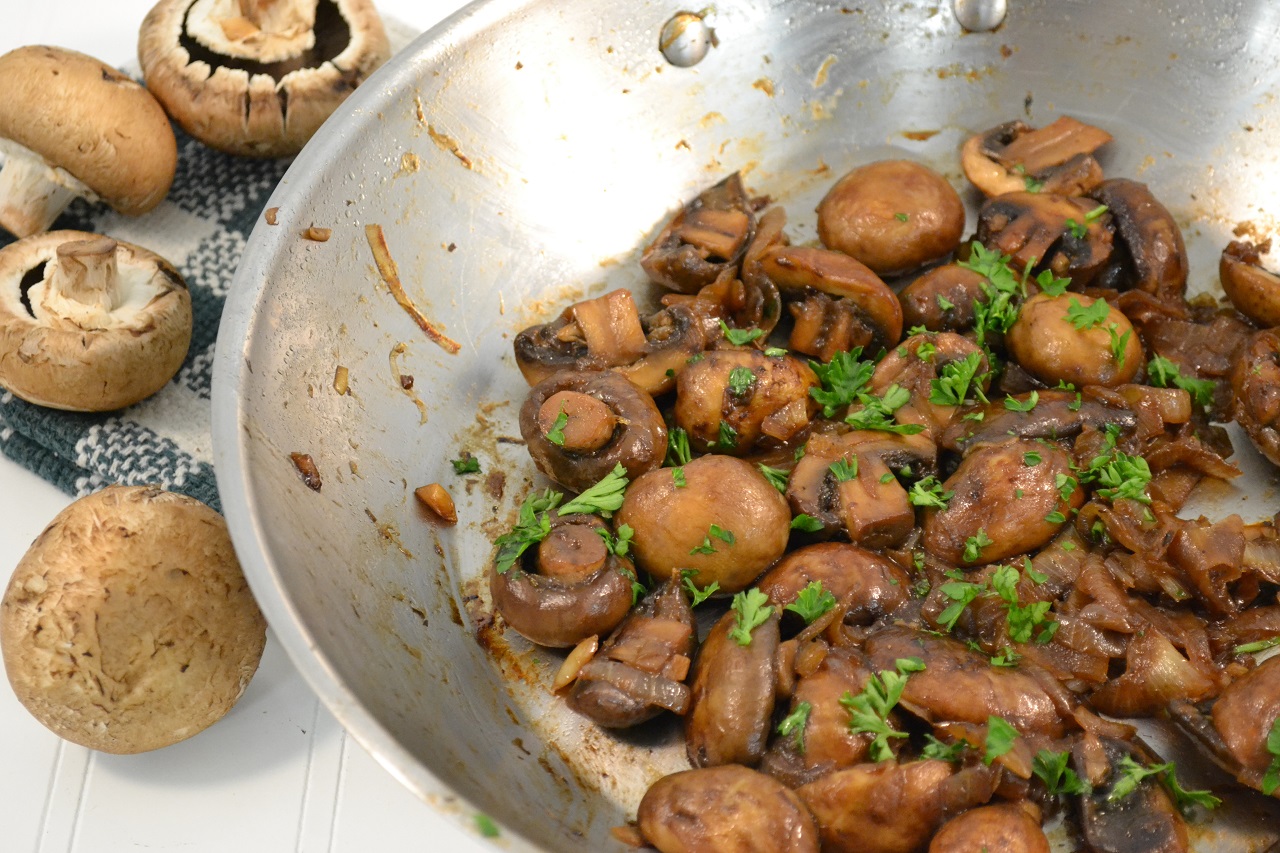 Add one cup of shiitake mushrooms and cover the skillet using a lid. Continue until the cooked shiitake is tender and it reaches a golden brown colour. This should take approximately five minutes.

Mix in a tablespoon of soy sauce and one tablespoon of lemon juice. Continue to cook this uncovered until the mushrooms have absorbed the liquid mixture. As an alternative, you can swap the garlic, lemon juice, and soy sauce for a quarter cup teriyaki sauce.

Place a wok over high heat until it starts to smoke. Add two tablespoons of peanut or sesame oil in the wok including a teaspoon of minced ginger and thinly-sliced scallions.

Stir-fry this mixture until it becomes fragrant and then add a cup of shiitake mushrooms. Stir-fry this combination until the mushrooms become tender and golden brown.

Other Uses for Shiitake Mushrooms

Although thick slices of the mushrooms are often sautéed or fried, there are also other ways to enjoy them.

For those who do not enjoy the flavour of its stems, they can be added to vegetable soups and broths for an added taste. 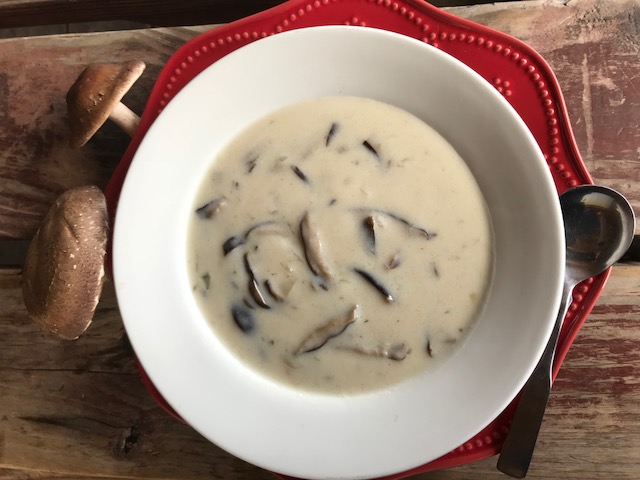 The stems can also be mixed into family pasta sauce ingredients or stewed to give recipes an umami-infused flavour.

Dried shiitake mushrooms, which can be bought in an Asian grocery store, often have a more distinct flavour compared to the fresh variety.

To prepare them for cooking, you need to soak the mushrooms with their gills down in hot water. This will rehydrate them until the mushrooms become tender. You can also soak dried shiitake in room temperature water overnight.

Once ready, squeeze the rehydrated mushrooms to bring out the excess water. If you do not plan to use the stems immediately, you can take them out and only soak the caps.

Rehydrated dried shiitake mushrooms can be stored in an airtight container in the fridge for several days. You can use it in a different recipe later on.

Shiitake mushrooms have long been used as both a food source and as a supplement. Although research on its health benefits look promising, there are only limited human studies performed on it as of now.

Since shiitake mushrooms are low in calories and contain plenty of vitamins and minerals, it does make for an excellent addition to any diet.