This fungi grows near and on trees (such as beech trees) naturally and is often found in subtropic and temperate forests around the world. However, they are also grown in many countries for commercial purposes.

Many people eat oyster mushrooms in various cuisines. They are particularly popular among Korean, Japanese, and Chinese cooking.

Compared to white button mushrooms, oyster mushrooms are more expensive. They require little preparation since they can be consumed chopped or whole.

This is the nutrition facts for a cup of raw oyster mushrooms (approximately 86 grams):

The carbohydrate content in a cup of raw oyster mushrooms is 28 calories. Most of its calories come from carbohydrates.

The mushrooms have low sugar, providing just below 1 gram and you can benefit from 2 grams of fibre upon consuming them. The other carbohydrate content of oyster mushrooms is starch.

Oyster mushrooms are close to being fat-free, as they provide approximately 0.3 grams of fat per serving.

The protein content in a cup of oyster mushrooms is almost 3 grams. There are several vitamins that can be obtained from oyster mushrooms. These include riboflavin, niacin, and pantothenic acid. You can also obtain small amounts of vitamin B6, thiamin, and folate.

As for minerals, you can expect to obtain potassium, phosphorus, copper, magnesium, iron, selenium, zinc, and manganese.

Substances present in oyster mushrooms are believed to influence human well-being. These substances include beta-glucan, dietary fibre, and other polysaccharides. Polysaccharides are a class of carbohydrates that can affect the immune system.

Many scientific studies on the health benefits of oyster mushrooms are beginning to emerge. Here are the potential benefits that this fungus can give according to research.

It May Benefit the Heart

Scientists learned that whole foods containing fibre, such as mushrooms, provide health benefits with little calories that make them an ideal choice for healthy diets. Some studies have found that high fibre intake has led to better cardiovascular health.

In one particular study, the authors mentioned that fibre in vegetables and other food make them great targets in preventing diseases while reducing the risk of cardiovascular problems.

It Could Lower Cholesterol

In one 2015 study, researchers learned that the dietary fibre part of oyster mushrooms could be useful in lowering the accumulation of triglyceride in the liver.

Some early studies on oyster mushrooms indicate that it could possess properties that fight cancer. In a 2012 study, researchers demonstrated that oyster mushroom extract may help suppress the growth of breast cancer and colon cancer within human cells.

However, more studies are still needed to fully understand how the oyster mushroom extract works against cancer.

Oyster mushrooms may benefit immune function based on a study that was published in 2016. According to the study, the participants were given oyster mushroom extract for 8 weeks. Once the study ended, researchers found proof that the extract could help enhance immune function.

Many health professionals recommend having a diet with plenty of fibre-rich vegetables. This is advised due to how it can help maintain a healthy weight. However, mushrooms may provide additional benefits by improving metabolic health.

In one study, researchers examine how edible mushrooms can affect obesity. The experts concluded that consuming mushrooms regularly is effective in treating metabolic syndrome, including obesity.

The researchers added that the practice has to be combined with physical exercise regularly, including other lifestyle and dietary changes.

There are around 40 species of oyster mushrooms today. Some of these are pink oyster, golden oyster, blue oyster, Phoenix oyster, and more. Each of these varieties have their own flavor profile. Generally, oyster mushrooms taste like a sweet and woodsy mushroom. 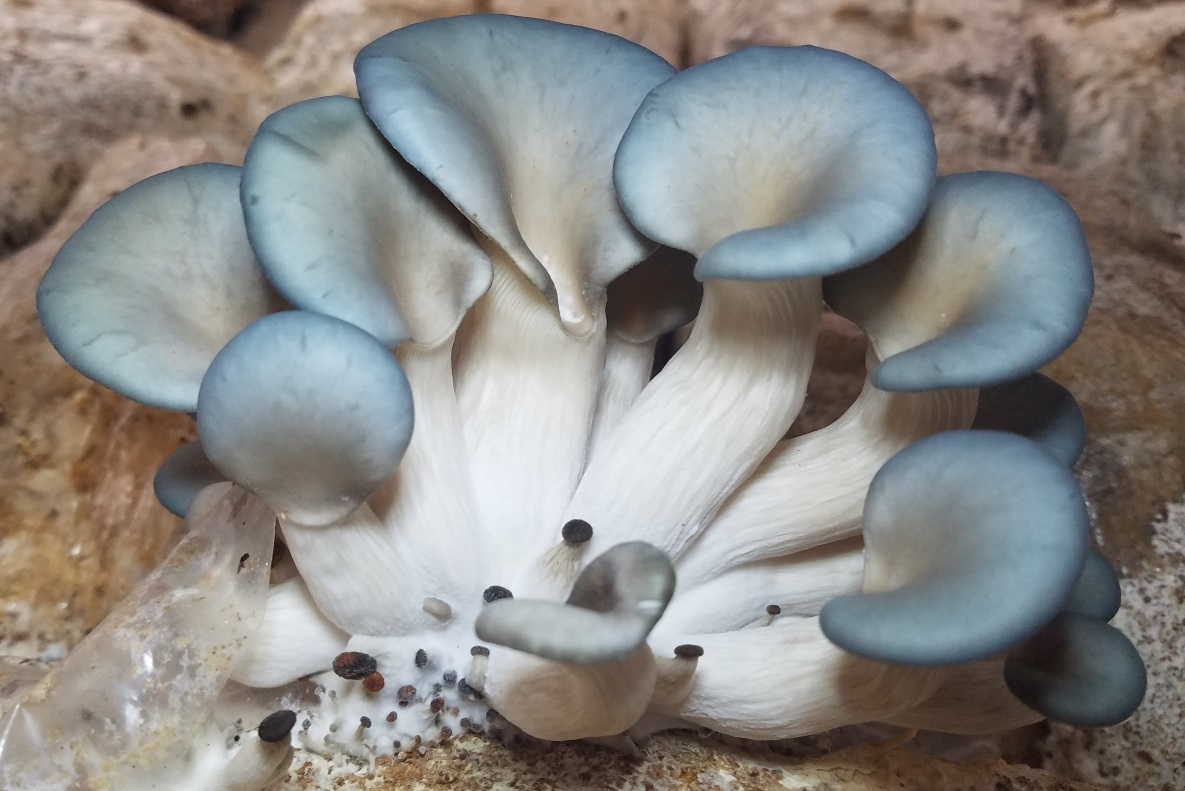 These mushrooms have a firmer texture compared to other mushroom varieties. That is why oyster mushrooms are a great addition to almost any recipe.

Pearl mushrooms are often found in North America. They grow in logs and the stumps of hardwood trees. However, mushroom experts suggest that people avoid consuming the ones they find in the wild unless they are sure that they have been identified properly.

How to Identify Oyster Mushrooms

There are some mushrooms that look similar to oyster mushrooms. People who are new to them can easily mistake one for the other.

The following are the details to know what to look for to identify oyster mushrooms.

The oyster-shaped cap is one of the first things you should look for when trying to identify the mushroom. Its shape should be like a fan or oyster.

Many oyster mushrooms are about 5 to 25cm in size. These should be smooth with no warts or scales on the outside. 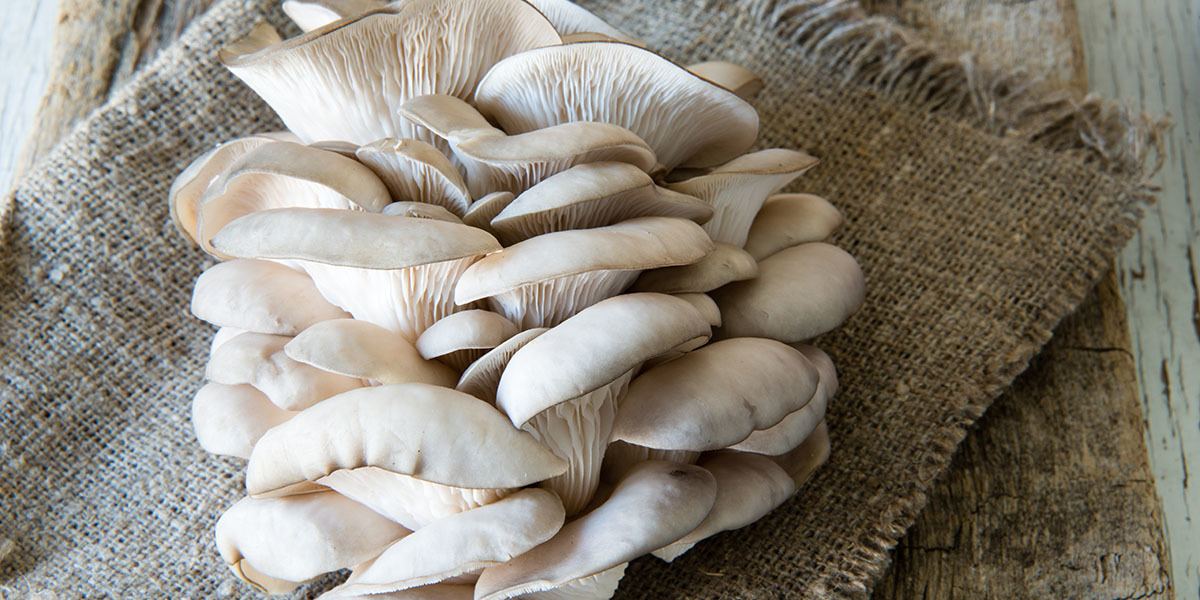 The flesh of the oyster mushroom pleurotus is white and firm. It can have a light brown to white cap on top.

Oftentimes, oyster mushrooms grow in a shelf-like formation with clusters that overlap one another. 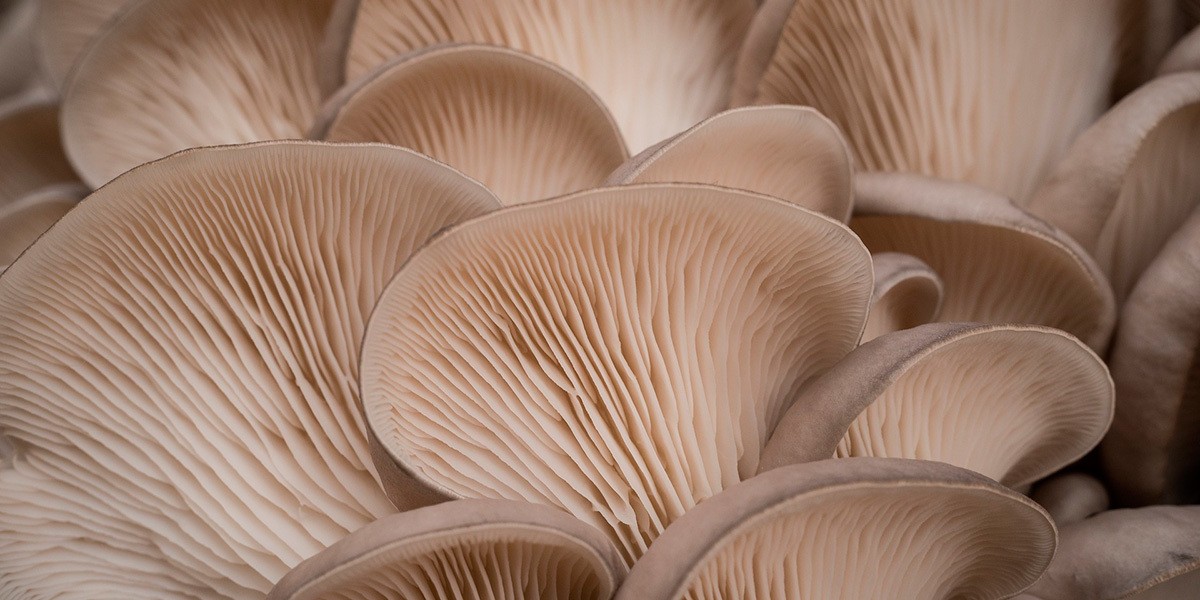 There are no stems in most oyster mushrooms. If they do, it is going to be stubby and short, often growing off its centre. 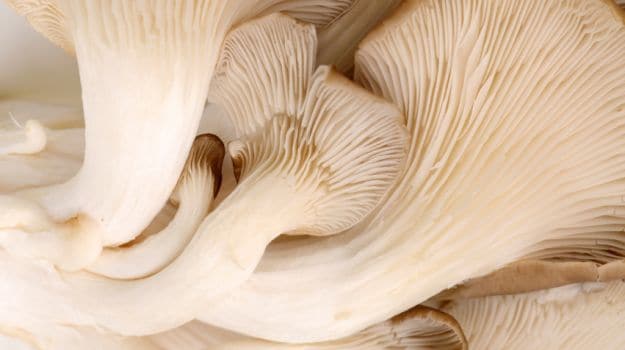 Oyster mushrooms that grew on top of logs may have stems that are more developed compared to those that grew on the side. There is also no rim or sack around the base of the stem white.

Make sure to test the oyster mushrooms for its spore prints. You can place them in a dark background to check. This mushroom’s spore print should be white, or even lilac-grey in colour.

How to Store Oyster Mushrooms

Just like all mushrooms, oysters are sensitive and delicate. They can spoil fast if they are not stored properly. Due to its flat shape, an oyster mushroom has a big surface area that can dry quickly.

Freezing or drying large amounts of oyster mushrooms can work as well. To freeze the mushroom, boil them first for about 3 minutes and then rinse. After draining thoroughly, you can then place them in freezer bags.

To dry the oyster mushrooms, preheat the oven to about 150 degrees F and then cut the mushrooms into slices. Bake them for an hour and then turn them over to bake for another. Once done, let the mushrooms cool to room temperature and then store these in an airtight container. 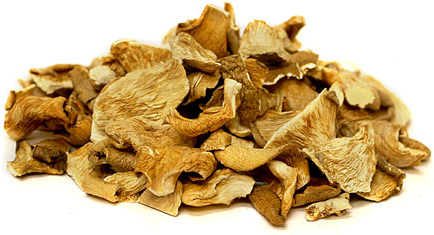 The mushroom with the name name pleurotus ostreatus, or oyster mushrooms, offer many vitamins and minerals that could help the body fight various illnesses. Although researchers have not fully confirmed the health benefits of oyster mushrooms, the findings so far looks promising.

That is why there are many companies today that are incorporating oyster mushroom extract in their supplements. People have also begun adding oyster mushrooms to their daily regimen to improve health and help in weight loss.